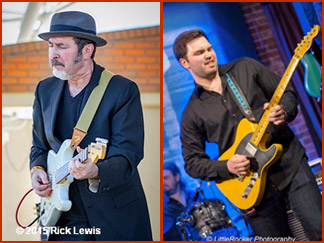 “Peter Parcek is one of the most criminally underrated blues guitarists despite having earned a BMA nomination ten years ago... Whether through his biting tone, sizzling chromatic runs, bent notes, or judicious use of effects his guitar alone is worth every minute of listening but add to that his weary, spooky voice and Parcek creates a singular sound unlike anyone else on today’s blues scene. His are the hard blues.” - Jim Hynes Glide Magazine

Seth Rosenbloom: Hailed by The Boston Globe as “a searing blues-rock guitarist,” and The Noise Boston as a musician who “makes his guitar growl and has a voice to match,” RosenBloom has been compared to “a slightly younger and rawer version of Matt Schofield ,” by the Blues PowR blog, which also praised him for “his gravelly, forceful vocals and stinging guitar work.”

“For me, playing the blues is all about expressing emotions,” Rosenbloom insists. “What’s always drawn me to the genre is the fact that it allows for an extraordinarily wide range of emotion. That, I think, is the key to making great music overall, and great blues in particular.”

Now, with the release of his first full length effort, “Keep On Turning," he shows again why he has been referred to as the future of blues guitar. Throughout the album, Rosenbloom commands center stage, with able support from Travis Carlton on bass (Robben Ford, Scott Henderson), Scott Kinsey (Tribal Tech) on keys and Gary Novak (George Benson, Chick Corea) on drums. Produced by Josh Smith, a world renowned blues guitarist in his own right, Keep On Turning was recorded at Smith’s Flat V Studios in Reseda, California.

Whether demonstrating his dazzling guitar riffs and stinging vibrato, or emoting with his soaring and sultry vocals, he brings a distinctive power and personality to each of his performances.
215 Great Road • Shirley, MA 01464 • 978-425-4311
bullrunrestaurant.com