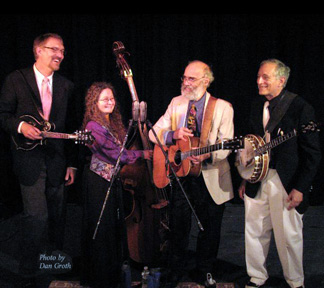 Over the years, Southern Rail's recordings, featuring their prolific songwriting, have graced Bluegrass Unlimited's Top Thirty Singles Chart for a combined total of 32 months, climbing to #11. One of Southern Rail's earlier CD's, a special Bluegrass Gospel compilation entitled Glory Train, was nominated for Best Gospel Recording of the Year by the International Bluegrass Music Association. Southern Rail has been selected by the New England Foundation for the Arts to be included in their prestigious Touring Roster.

"One of the most significant groups in contemporary bluegrass...on the cutting edge of creativity." - Bluegrass Unlimited Magazine, VA

"The vocal harmonies are exquisite and the musicianship is impeccable." - Radio Star, Ireland

"Unplugged and untamed! One of the hottest groups on the circuit!" - Chico News & Review, Chico, CA